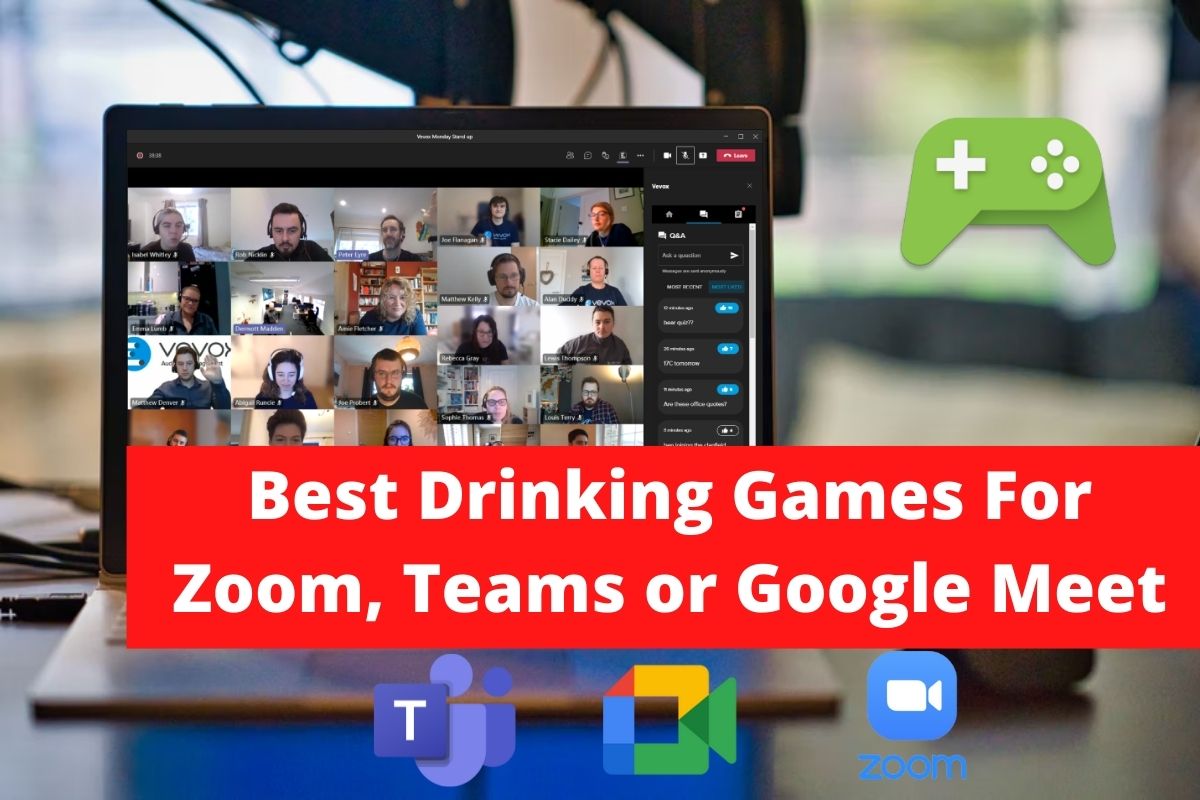 People in this Covid circumstance really miss hanging out with their friends at the local pub. People are seeking alternatives because no one knows when they will be able to hang out as they used to. This article will go through a few Zoom drinking games that you may play with your friends and coworkers while on a Zoom, MS Teams or Google Meet call. So, without further ado, let’s get this party started.

This is a straightforward and enjoyable game to play with your pals. All you need are two shot glasses, one filled with water and the other with any clear alcoholic beverage such as vodka, gin, tonic, tequila, and so on. Choose a glass (water or alcoholic beverage) and consume it when it’s your turn. Then you must say “water” or “not water,” and the other participants must determine whether you are telling the truth or not. If they figure out your ruse, you’ll have to take another shot. However, if someone falsely called your bluff, they must drink a shot. This game is based on the popular HBO show Run. In the second episode of the show, the characters Bill and Ruby play this game.

Every group has a member who is more likely than others to take action. It’s all about deciding in this game. It’s a wonderful way to learn what people think of one another. It is not only a drinking game, but it also enhances the bonds between friends and coworkers.

The game’s rules are simple: you must offer a hypothetical question, such as “who is most likely to get arrested?” Others will now have to choose someone from the group who they believe will be a good match. Everyone votes and the one who receives the most votes is forced to drink. To prepare for it, you should write out some interesting scenarios and questions to ask during the game. If you’re feeling sluggish, you can always turn to the internet, where you’ll find many “most like to…” questions. This game is simple to play on a Zoom call and is a pleasant way to pass the time.

Never Have I Ever

We believe most of you are familiar with this traditional drinking game. Fortunately, it can be played on a Zoom call just as easily. Here are the rules for individuals who have never played the game before. You can begin at any time and say anything you’ve never said before. For instance, you could remark, “I’ve never been suspended from school.” Others who have done this will now have to drink. Start with simple questions and settings that will compel the majority of individuals to drink. This is because the game only becomes enjoyable and spicy after the players are a little tipsy. The best secrets are revealed, which makes the game even more enjoyable. This game is ideal for sharing embarrassing and risqué aspects of your life. By sharing them with your pals, you are strengthening your friendship.

Two Truths and One Lie

The following game is a great technique to get your pals to drink. It all depends on your ability to fabricate information. As the name implies, you must recite three sentences about yourself, two of which must be truthful and one of which must be false. Others must guess which of the two the lie is and record their responses. All individuals who answered incorrectly will have to lie later when you reveal whatever statement was actually a lie.

One of the finest drinking games for Zoom is Pictionary. It’s a classic party game that can easily be turned into a drinking game by increasing the stake to include shots. You can either use a physical pen and paper or use the screen sharing feature while drawing on “Paint” because you’re all linked on a Zoom call.

The game’s rules are straightforward: you must draw something, and others must guess what it is. It could be a theme, an object, a film, or something else. If others can’t figure out what you’re sketching, you need to drink something.

This timeless card game is a crowd-pleaser when played with friends and family. Despite the fact that the game was designed to be played with a real deck of cards, there is an official UNO app that allows you to play it remotely. This is exactly what we’ll accomplish on a Zoom call while keeping connected.

Here’s a quick rundown of the games if you’re unfamiliar with them. The deck consists of four-color cards with numbers ranging from one to nine. There are also unique power cards such as skip, reverse, draw 2, draw 4, and so on.

You can add a few custom cards to make the game more exciting. The goal of the game is to eliminate your cards as quickly as feasible. More comprehensive rules can be found on the official website.

Now it’s up to you how you want to include the drinking factor into this game. When someone is dealt a power card, such as skip or draw 4, he or she may be required to drink. In addition, the last person to finish the game, i.e. the loser, is required to drink his entire drink. As previously said, you can create your own custom cards and regulations, including drinking duties if any player is affected.

Drunk Pirate is an easy-drinking game that can be played over the phone or via Zoom. You have to go to Drunk Pirate’s official website and share your screen with others. You can enter the players’ names here, and the game will be created for your group.

The website will produce amusing instructions such as “Everyone sitting in a wooden chair has to drink” or “Everyone wearing a blue shirt has to drink.” Some directions, such as “girls and boys swap places,” may be difficult to follow because the game was originally developed for a group of people in the same room. You can skip these rounds if you want, and you’ll still have a nice and entertaining online drinking game for Zoom.

This is a drinkable version of the traditional Truth or Dare game. The basics are simple: you go around the room asking uncomfortable questions or challenging them to do something ridiculous, and if they refuse, they must drink instead.

It’s a wonderful technique to persuade your buddies to reveal secrets or play practical jokes on them. The only way to avoid it is to become inebriated. So, make good decisions, or else you’ll be getting tipsy very soon.

This article has given all the required details regarding best drinking games for zoom. If you have any other issues related to this, let us know in the comment area.

Read all How-To articles and Fixes related to Software here.